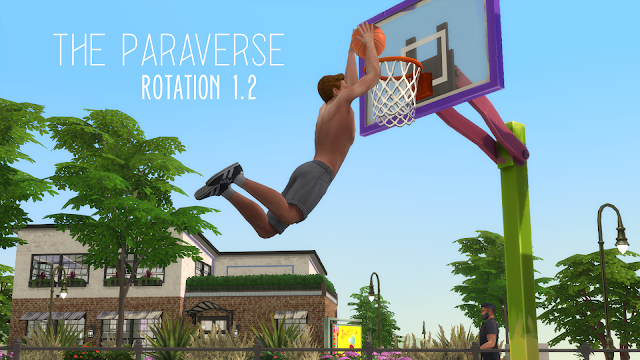 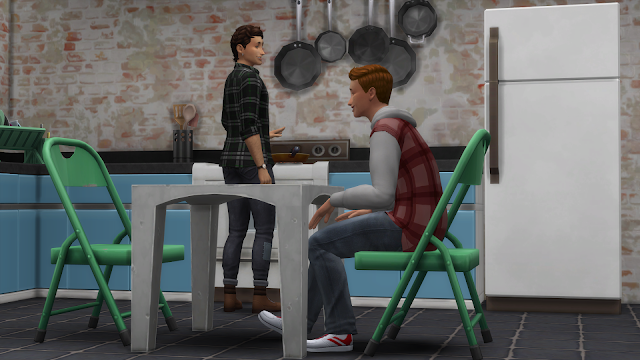 The next household in the rotation consists of Jeff and Alec, two brooos who will eventually be chilling in a dorm room (five feet apart because they're not gay) together.

Much like Andy, they also got a little wardrobe update. Alec didn't change much, because I feel like his black plaid shirt is kind of ionic Alec at this point, but Jeff gets a sweet new plaid shirt (to match his bro, of course), and the same sneakers that his daughter wears in another universe... 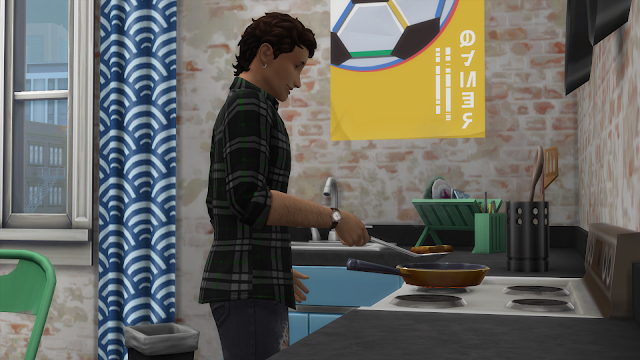 I know I constantly say that I want Alec to eventually open his own restaurant in my main save, but guys, This Will Be The Save. I don't care if dine out is ridiculously broken, or if he won't actually be able to be the head chef at his own restaurant, Alec Winchester is opening A Restaurant.

Of course, he needs to go to culinary school first, and I'd still like to have him top the regular chef career, but I'm hoping that having a ~distinguished~ degree in the culinary arts will boost him through the career track fast enough that he will actually be able to open a restaurant before he starts turning old and wrinkly. Again.

I've kept his traits the same as my main save, so he's still a self-assured, foodie loner, but he'll be working through the new academic aspiration before moving on to the master chef or nerd brain aspirations. 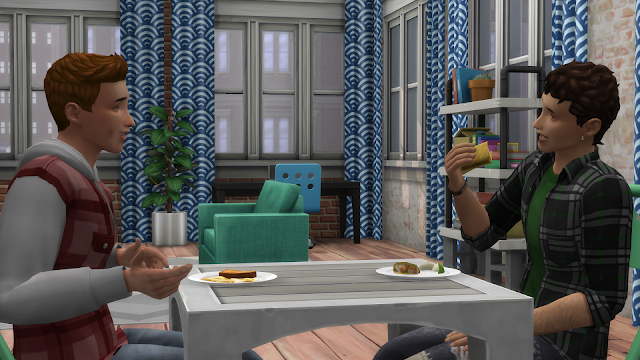 My plan for Jeff is a little different. Jeff doesn't actually strike me as an academic man, but he does strike me as someone who would go to university solely to play sports. And so, sports Jeff shall play.

I'm not concerned with actually having him earn a degree - I know from playing the Winchester kids in my main save that sims on the soccer team can be offered a job if they drop out of school, so my goal for Jeff will be to have him earn a job offer while playing on the team, instead.

He kept his original bodybuilder aspiration, along with his traits, so he's still a hot-headed active bro. 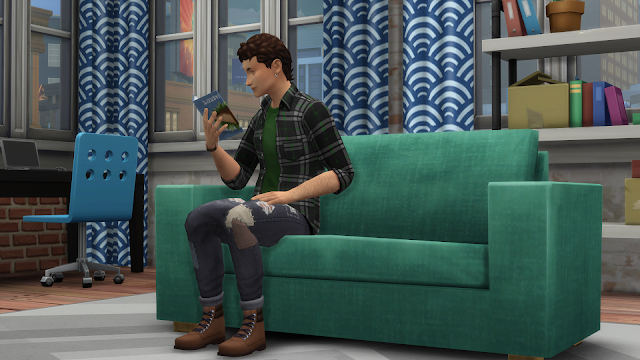 I had Alec spend a lot of his time alternating between books to quickly build up some skills in cooking, gourmet cooking, and baking. Not super exciting stuff, so I didn't take a lot of pictures. 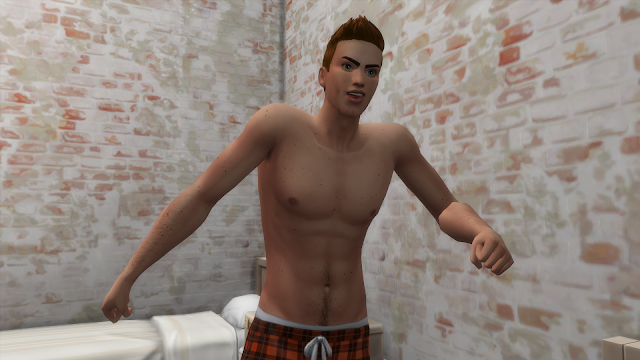 Jeff woke up super mad the next morning, and I only just noticed that angry sims have a slightly different animation when they first wake up and make their beds! 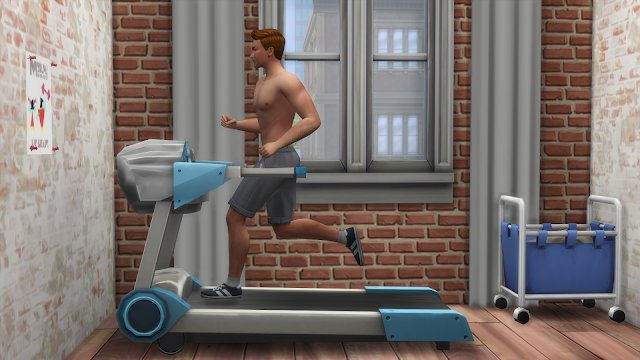 I sent him on a 'rage-fuelled' run to start building up his fitness skill. I'm really not concerned about building any other skills for him; I think he'll be accepted into any of the regular degrees at Britechester regardless. 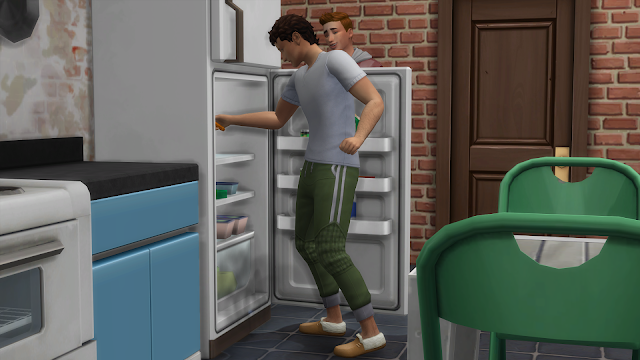 I initially gave the boys gremlins, chef's kitchen, and bracing breezes as their lot traits, but after seeing how long it took Alec to repair all their appliances after their first night in the apartment, I decided to swap out the gremlin trait for peace and quiet, so that Alec can level up faster with the skill books. 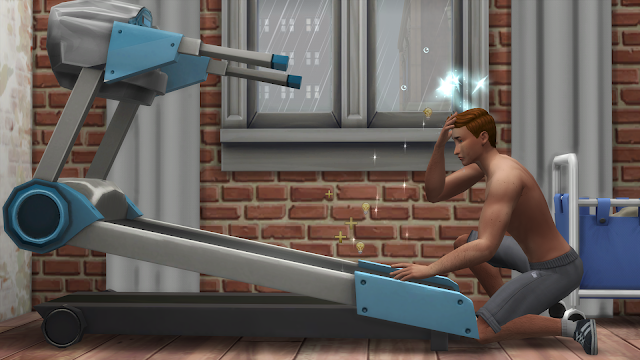 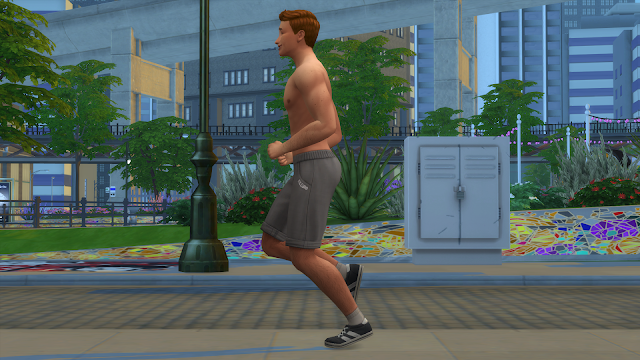 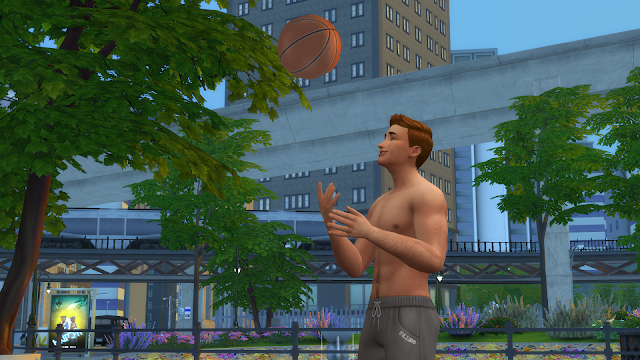 I'll probably move my households around a bit more in this save - I think things will start to feel repetitive fast if they all end up in the spice district again - but I think I might end up keeping Jeff here. It's just such a good location for him - the block is perfect for jogging or biking around, and having a basketball court right outside is super convenient.

I might change things up by moving him into the salt house this time around - it'd give him for space for outdoor activities, and would be much better suited for, say, a future dog... 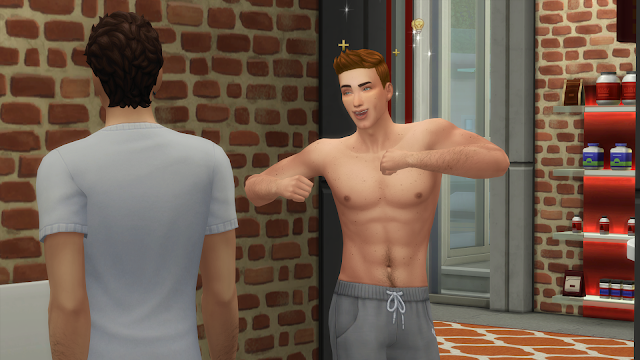 And speaking of sporty activities, it's time for the first gym date, bros! 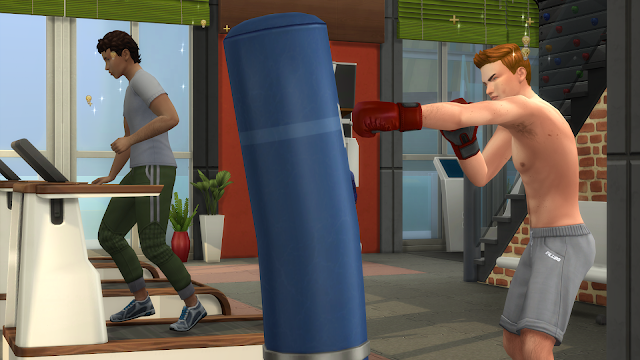 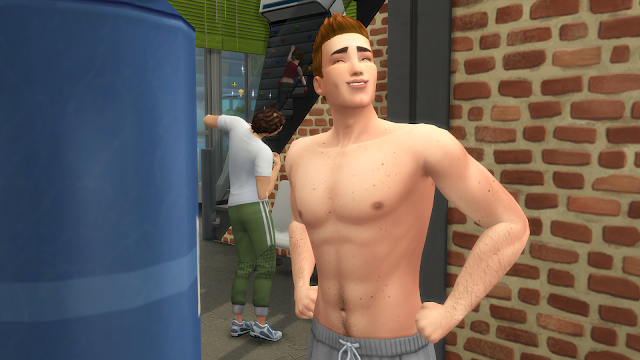 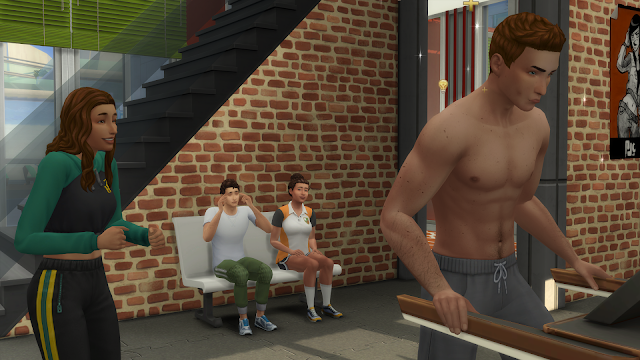 I love everything that is happening in this picture - the gym trainer cheering Jeff on, Jeff's look of determination, Alec looking like he is trying to get out of working out any further by claiming to have a headache... 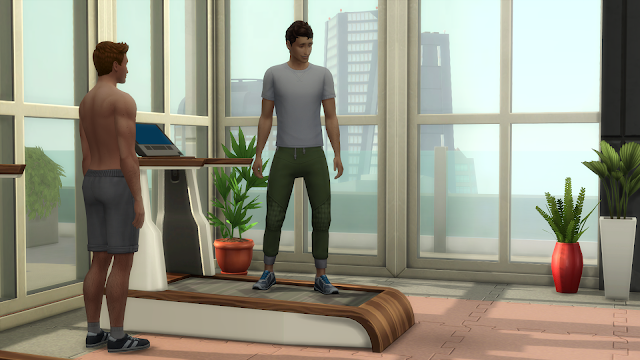 It'd be nice if Jeff had enough fitness skill to coach Alec himself, but I think he needs to max it out to unlock that interaction, so that probably won't happen for a while. 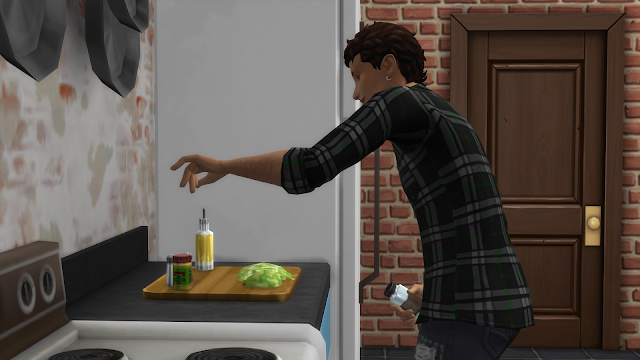 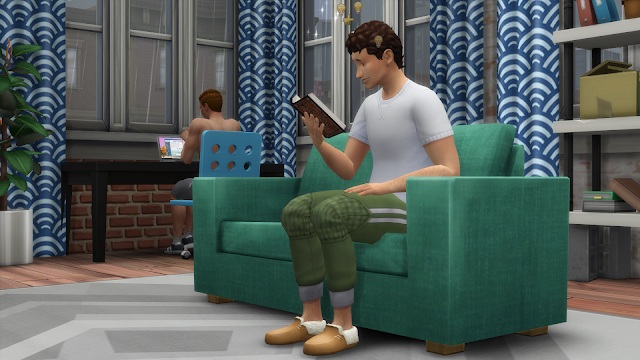 Back at the apartment, Alec cooks up a nice dinner for himself and Jeff, and then spends the rest of the evening reading up on vampires. He actually rolled up a whim to research them, so I was very pleased about that. 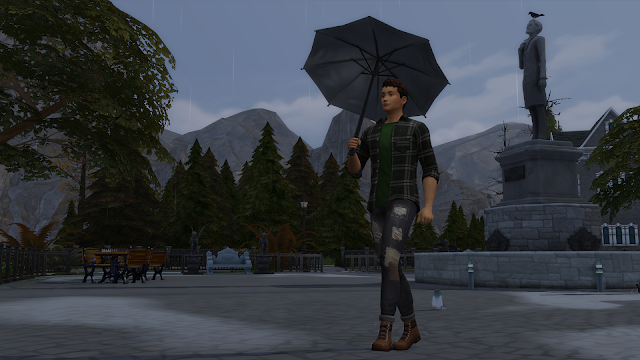 Speaking of vampires, I sent him to Forgotten Hollow the next day to see if he could harvest any garlic, but sadly none of the plants were ready yet. 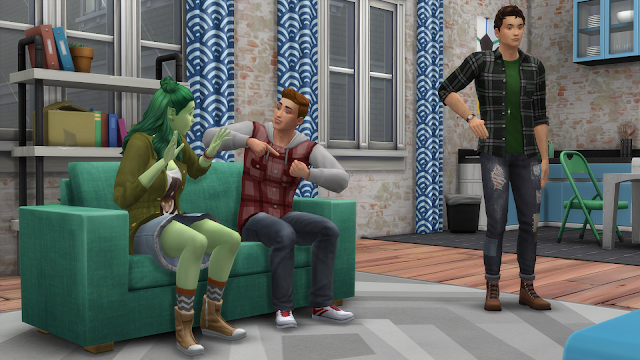 I had Jeff invite Andy over when he got back to the apartment, but there wasn't a lot for them to do inside, and there was a storm going on outside, so I ended up sending them all over to Brindleton Bay instead. 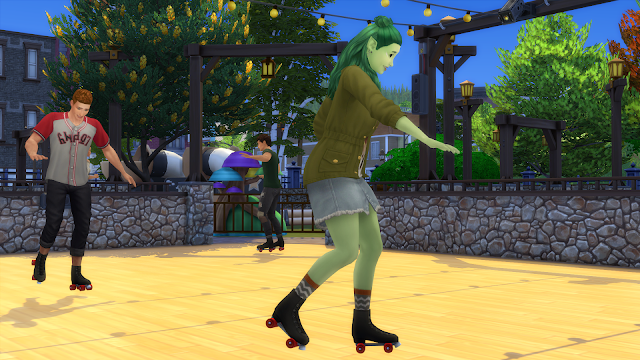 While in Brindleton they head to Pupperstone Park for some rollerskating.

Recently, I've given up on trying to makeover all the community lots myself - I can easily spend an entire day just redoing one lot, and I've found myself avoid visiting lots that I hadn't had a chance to decorate yet because they tend to be really empty-looking and poorly lit.

So, I downloaded a bunch of nice lots from the gallery (this park being one of them), and I'm hoping having a bunch of nice, new places for my sims to visit will encourage me to get them out of the house more. 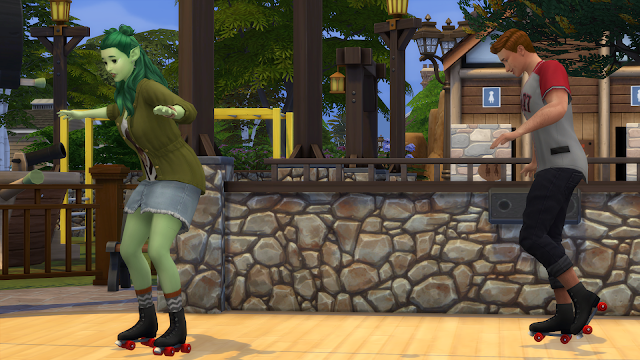 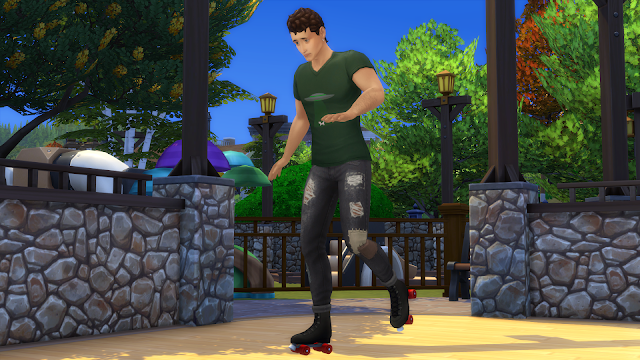 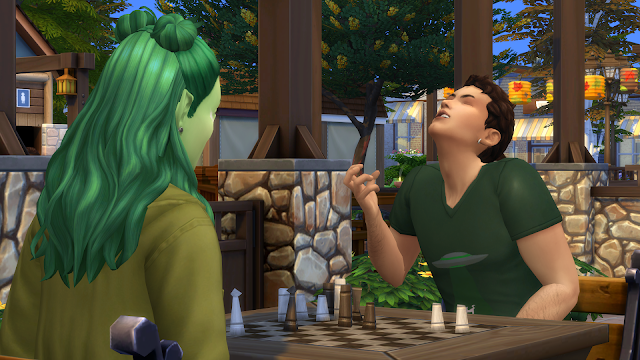 Andy and Alec sat down for a game of chess, and halfway through the game, Alec seemed to realize that Andy was, in fact, an alien, and got really mad about it. 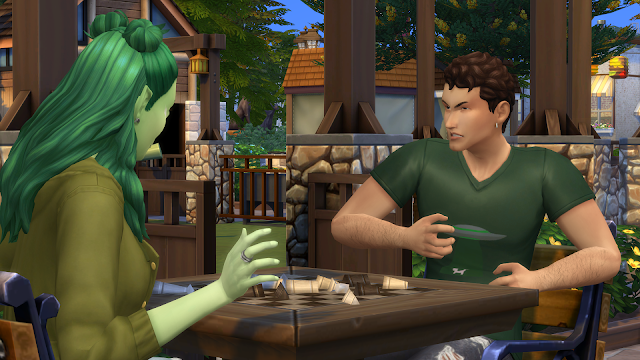 So mad that he proceeded to knock over all of the chess pieces? I was shook, I had no idea that sims could rage quit chess games! 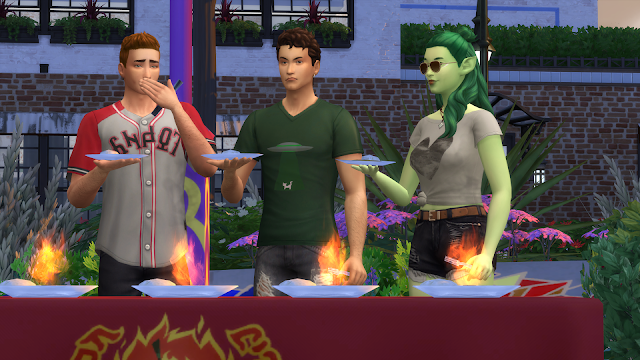 The spice festival is in town that night, so they don't get a chance to start a new match. Instead, they head back to the spice district with Andy, and have a go at the spicy curry challenge.

Alec, as you can see, is still a little pissy about the alien thing. Aliens are only allowed to exist on his t-shirts, I guess. 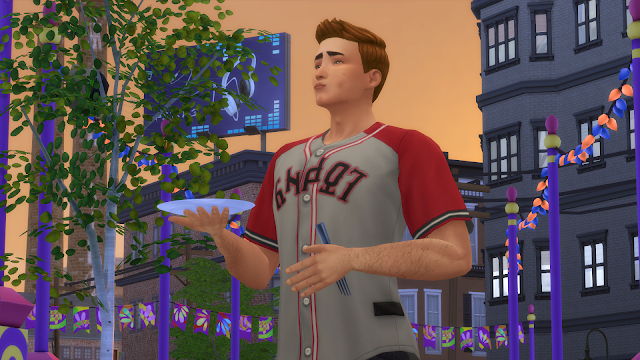 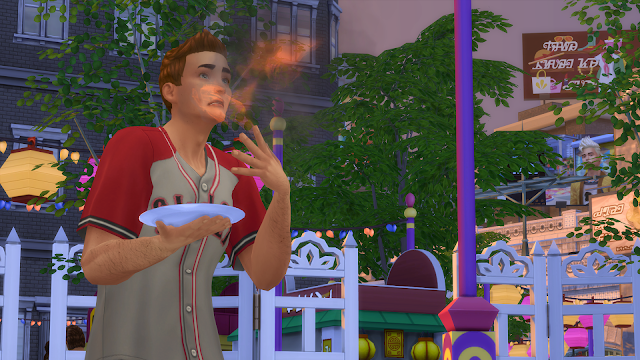 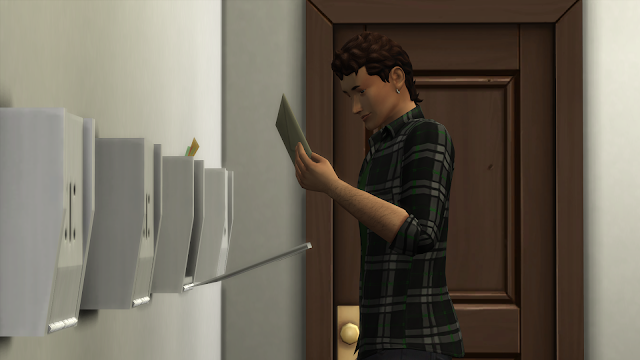 Their scholarships and acceptance letters come in on the last day, and Alec gets accepted into Britechester's culinary arts degree with ease. He also managed to snag the food and drink scholarship on top of that.

Jeff doesn't get accepted for the athletic scholarship just yet, but I'm hoping he'll be able to apply for it again later on. He did actually have a high enough bodyskill to get accepted into Foxbury's distinguished biology degree, but I sent him to Britechester for pyshcology, because it is crucial that he and Alec share a dorm room together.

How else would they develop a bromance otherwise?

There is only one household left in the rotation (I felt like writing any more than three updates per rotation would just be too much for me at the moment) - and as you can probably guess from reading Andy's first update, it will feature Liv and Cole!
on March 13, 2020